Gareth Saunders and his wife Jane had a challenge. Two of them, named Reuben and Joshua. As Gareth described things in an email, when the twins were born, the couple used Double Duty, a “care diary” where parents can track feedings, medication, and so on.

We got into a daily rhythm of creating feeding bottles for the day, and laying them out on a tray… For the first couple of weeks of doing this we’d get muddled. How much do I fill the bottles? (They sometimes took different amounts depending on the time of the feed.) Which bottles have been used already?…

Looking at this as a job aid:

What’s the accomplishment?  Twins who are fed on schedule with the desired amount of formula.

Who are the performers? Mainly Gareth and Jane, the parents, though sometimes the task was delegated to, let’s say, temporary staff.

Sometimes you need more than one job aid. The parents were trying to accomplish a number of different tasks, and some, like the feedings, occur many times a day. High frequency is usually an argument against using a job aid. In this circumstance, though, the on-the-job environment, with its conflicting demands, divided attention, and fatigue, hindered success.  Which means a checklist, a job aid to support accuracy and completeness, made a lot of sense. 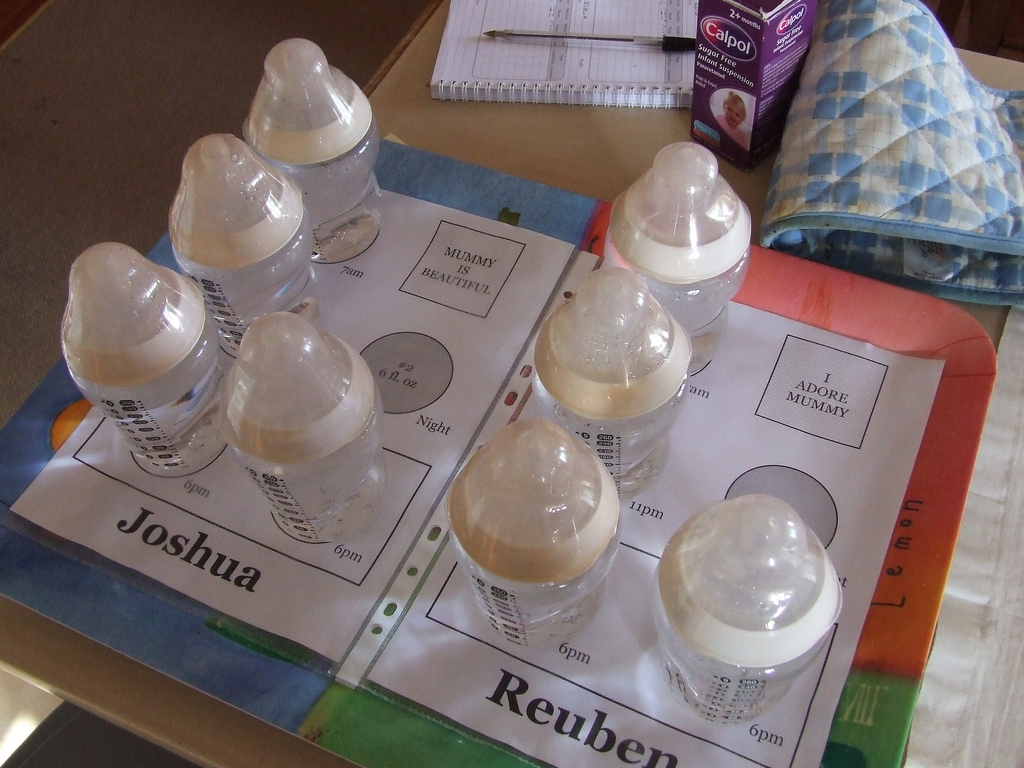 You can see the care diary at the top of the photo. Gareth and Jane already had this type of job aid–a worksheet–to guide their child care. Worksheets help you collect pertinent information to support a subsequent action or to provide a record of what you’d been doing.

The baby-feeding cycle and its “performance requirements,” however, meant that sometimes the worksheet just didn’t get completed. The couple began using the ready-to-fill bottles, arranged on Gareth’s homemade forms, as a three-dimensional checklist.

This method was really great, particularly when folks came in to help…

In other words, the checklist made it possible for “untrained workers” to produce the accomplishment (babies fed proper amounts according to schedule)  while maintaining the used-bottle audit trail.

Some of the reasons I find this such a useful example:

I’m especially grateful to Gareth, who is an information architect at the University of St. Andrews, for permission to share his photo and the background information he so cheerfully provided.