About this job aid

Malaria is transmitted to humans through the bites of infected mosquitos. WHO (the World Health Organization) estimates 219 million cases of malaria, and 660,000 deaths, in 2010 alone (last page in this summary).

Rapid diagnostic tests (RDTs) provide a quick alternative to clinical-based diagnosis, testing for specific proteins produced by malaria parasites. Different tests have different capabilities; some can detect only only species of parasite, such as Plasmodium falciparum (hence “Pf test”). These tests are often conducted by local-community health workers.

A key reason for the RDT is to shorten the time between the onset of symptoms and the beginning of treatment. This WHO job aid is a guide to performing such tests. 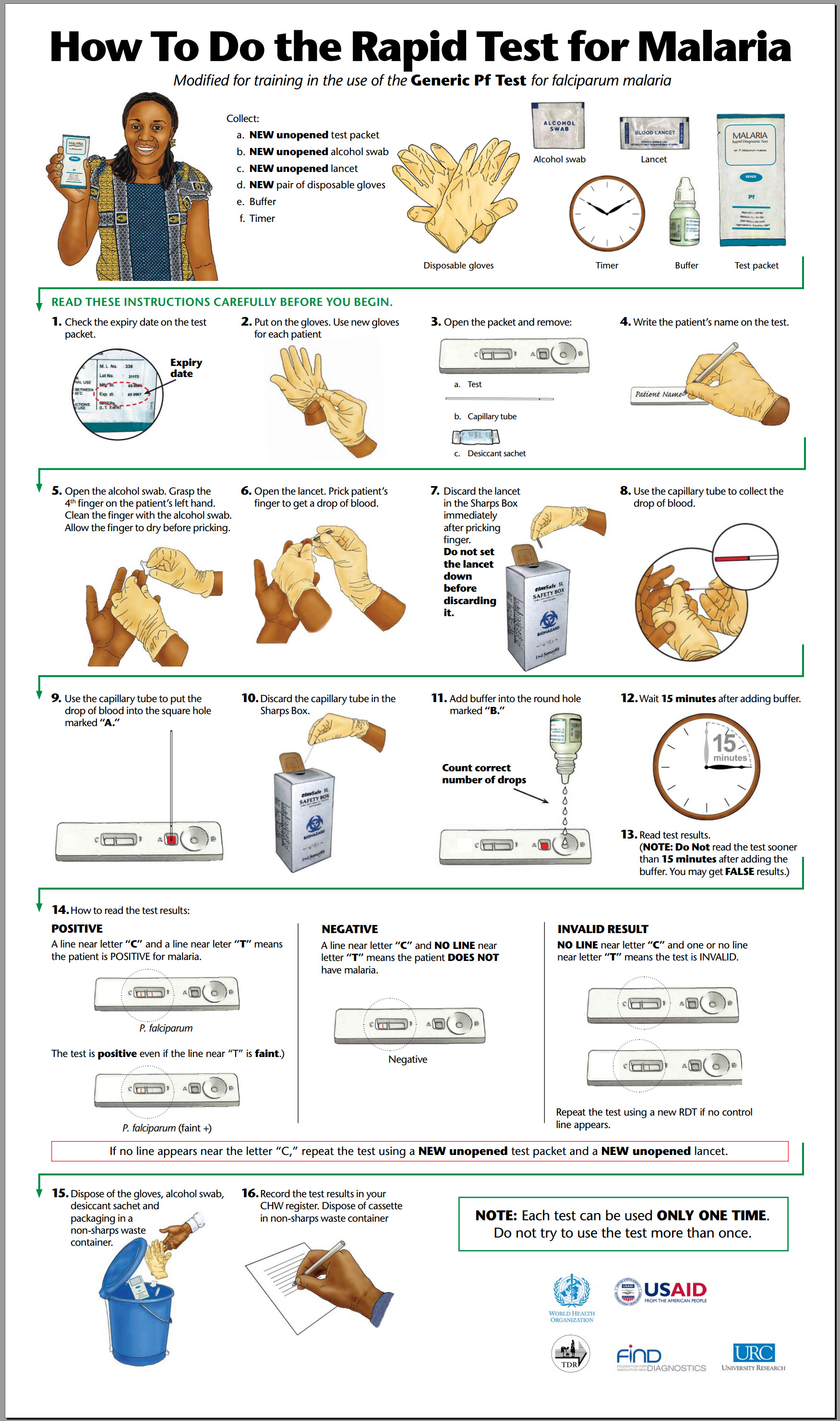 Click the image to view in a separate window.
Based on training materials at the
Malaria Rapid Diagnostic Tests website.

Correctly performing the generic Pf test for malaria.  This involves using the materials in a medically correct and safe manner, as well as correctly interpreting the results to determine whether the test is positive (indicates malaria), negative (no malaria), or invalid (need to repeat the test).

Health workers, often “in rural areas with limited access to health and laboratory facilities.” These workers may have low literacy and little formal training in the use of the RDT. They may also have minimal supervision in the field.

I haven’t seen other examples, though. It may be that the buffer bottle spells out the number of drops clearly, and that the training stresses checking that number.

You’ll often see arguments that a job aid should be brief. That’s a relative term and often misleading. The essential characteristic of a job aid is that it successfully guides performance by specific kinds of performers. If they can’t succeed with a five-step job aid, maybe you need more steps.  If you can’t fit the steps into a given size, then maybe that’s not the right size for that bunch of steps.

Consider: two pages, a larger page, a reframing of a big job aid into three smaller ones (How to Set Up the Widget Modifier; How to Modify a Widget; How to Check Modified Widgets).

(Note: with the following point, I’m musing about job aid design in general. I am not trying to second-guess the developers of this particular job aid.)

I might have made different choices for steps 15 and 16. 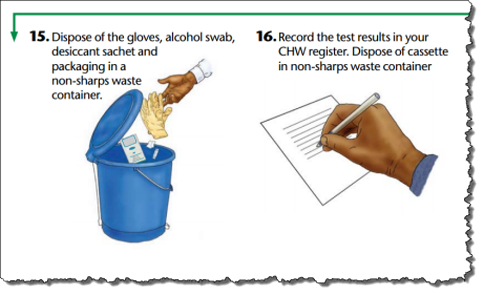 Those steps seem to involve three chunks of behavior:

I assume that good practice says “write down the results before you discard the test cassette.” If that’s the case, it might make sense to underscore discard-write-discard with a new step 17. It would look like step 15 but with an image of the cassette.