In a sense, it’s easy to build a job aid for a procedure or for guiding decisions. Tasks like that tend to have a specific audience working toward a specific outcome. I want to share ideas on how to develop a reference job aid, using the weather-temperature converter I wrote about as an example.

Even if you know some of the material that will go into the reference, it’s good to spend time thinking through its purpose.

Who’s going to use it? What for?

Stated as a formula, and then filling in for my example, the purpose of the converter job aid is:

That’s not bad, but for the job aid I had in mind, clarity came from building context in.

It actually took me three or four drafts to get to that, which suggests context isn’t always obvious. More important, context can suggest that you need more than one reference. The context informs the task analysis, and in some cases refines it.

In the case of my converter, context led to these design considerations:

Since close enough was good enough, I could use bands of temperatures instead of a chart in one-degree increments. For most of North American, an overall Fahrenheit range of zero to 100 covers the territory pretty well. And as it turns out, a span of 10 Fahrenheit degrees is about 5.5 degrees Celsius. 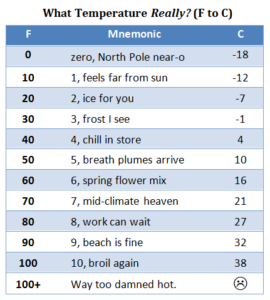 It was 83 degrees in Las Vegas one day during the conference. A Celsius user could:

It doesn’t hit 27 Celsius that often in most of Canada, but Canadians have a sense of what 27 means — in the same way that it doesn’t hit 98 that often in upper Michigan, but someone living there knows 98 is “hot,” and significantly hotter than 88.

Often more than one reference

Many times you can organize the same reference information — or a subset of it — in multiple ways: HTML codes alphabetically, HTML codes by category. There are many different people who use HTML codes, and their reasons for looking up the codes can vary, like interpreting a tag in someone else’s code, or checking what the values are for a particular attribute.

Having created the F-to-C converter, I saw the obvious possibility of a converter for C-to-F (to help Fahrenheit users understand weather temperature given in Celsius). 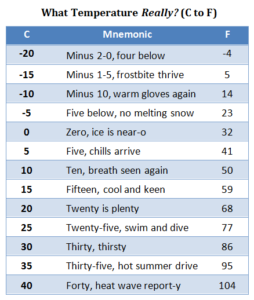 Most of the time, I think a given individual would use only one of these — people already understand the weather in the temperature scale they’re accustomed to. But a person might want to convert her own system when communicating to someone in the other.

That’s the nature of references: you can’t always be sure who’s consulting them, or why. The “task” is much more amorphous than, say, assembling IKEA’s Billy bookcase, which makes it worth your time to ponder the two aspects of a reference job aid’s purpose: who’s going to use it? What for?