About the Tech Rider

A tech rider is an equipment-related checklist used by musicians and the venues in which they play. It’s a rider or addition to the performance contract.

A tech rider is a one-page document that gives the venue and/or soundman an understanding of what your technical requirements are and how to set up the stage before you arrive. It also gives them an opportunity to let you know if they can’t accommodate any of your needs.

From the SonicBids blog

Recently I came across the website of Rahul Samuel, an acoustic consultant and live sound engineer in Karnataka, India. He has a post on how to make the perfect tech rider for your band. Rahul was kind enough to allow his rider to be featured here at the Ensampler.

There are eight main parts–which is to say, the checklist has specialized sections based on a particular focus or concern. 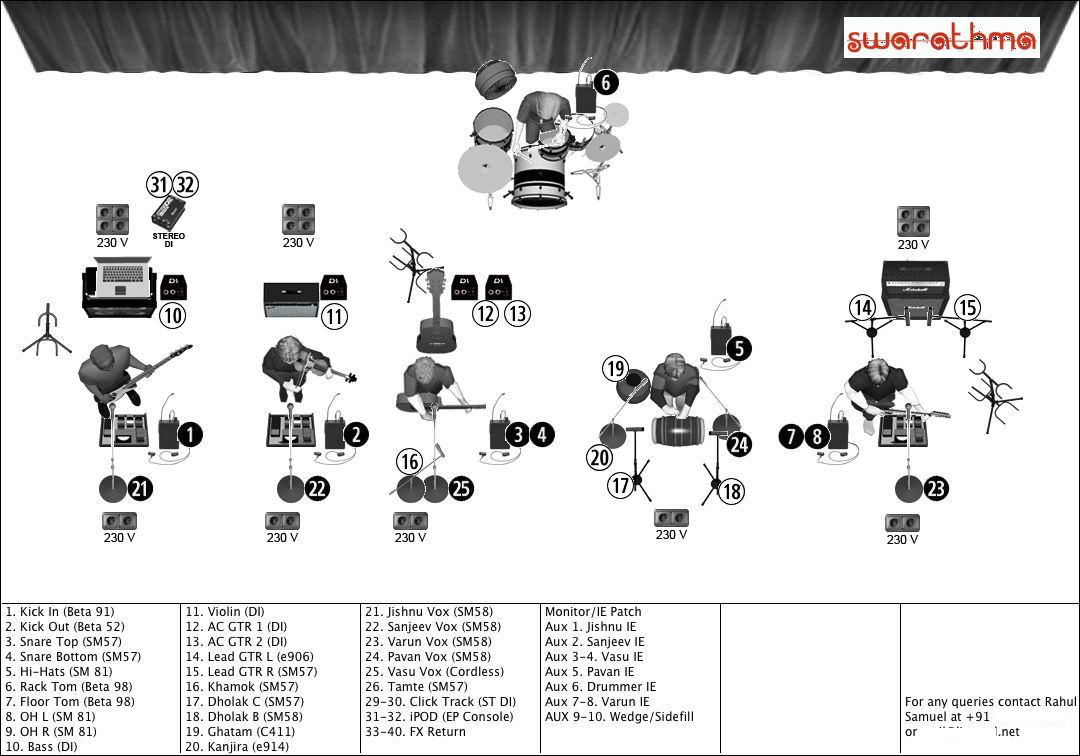 Performers (not the musicians; the people using the checklist)

A number of people can make use of the tech rider. First, the person responsible for collecting the band’s requirements. A brand-new band can work with a sound engineer to learn about equipment and work up their own tech rider.

The other party in the performance is the venue, and probably a specialist like the venue’s sound engineer (on staff, or contracted).

Checklists, in whatever form they take, focus on completion, coverage, and verification. As Rahul says, “Tech riders are great, they not only bring the sound vendor and sound engineer up to speed, but also work as a brilliant check list for the band.”

So: the tech rider lets the venue know what the band’s needs are, how the stage should be set up, and so forth. If the venue can’t accommodate those things, both parties can deal with that situation ahead of time.

Rahul’s post includes requirements for the venue’s sound system and the FOH (front-of-house) console (sound mixer). There’s a great deal of technical information compressed into twelve lines; the goal is clarity and completeness.

Rahul’s post on the tech rider includes some tips that could easily be built into the form a band uses for its rider. Two of them are practical for form-type job aids in general:

Put the band’s name and tech contact information in the header, on every page.

Rahul mentions that when working at a festival, he’s received a patch list with no idea which band it was for.

Far easier for someone to know if he’s missing part of the document.